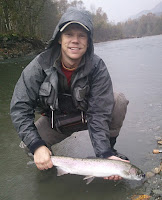 I have mostly been fishing the skagit in between trips running back and forth from the Methow river.
The local scene has been pretty fun. This is that time of year that you never know what you are going to hook. In the last week we have hooked coho, steelhead, sea run cutts, dolly varden, chum and even a rainbow.
Me and Chris (pictured on the right) planned to fish the skagit last friday. I thought, on the was we would stop off and hit a little run on the stilly on our way there. We had to drive by it anyways. We stopped off and hit the nice steelie. Once we got to the skagit we hooked some salmon, Dolly's and also hit another steelead.
I do have a guy looking for a partner on the Skagit on the 18th.

The weather on the Methow has cooled off and your likely to have ice in the guides for the first couple hours in the morning. The fishing has also slowed with the cold temps. The river is still low and likely to stay low as most of the moisure just turns to snow. Hwy 20 was a pretty interesting drive with a trailer behind me, snow dumping and about a foot of snow on the road as I was headed back home. I made fresh tracks most of the way back over the pass. WDOT will probably close Hwy 20 soon.

I am starting to book for the Peninsula now.  I'll fish from Feb - the end of April. Prime time is from March - April 15th. Dennis isn't going to fish over there next season. He got frustrated with the drive and the river blowing out.

If you get a chance check out - http://washingtonanglerspac.com/

Posted by streamsideflyshop at 7:24 AM No comments: