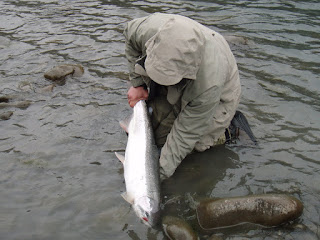 It's amazing all the rules and regulations they try to put on sports fishermen with out fixing the real problem of #1 netting rivers and #2 commercial fishing. Also if you want to reduce fishing pressure I vote for opening more rivers, catch & release single barbless with no bait - lowww impact. Spread out anglers. I have heard things may happen on the Skagit someday. Even if numbers are lower on a river like the Skykomish, maybe open it a couple weeks of the month instead of a complete shut down. If it's late season and most fish are spawning then shut it down.
As an angler we need to do our part if we do catch and release by carefully landing fish preferably with a rubber mesh net and minimizing time out of water if any. Resuscitate fish when needed. Also it is possible to fatally harm steelhead when landing them on the rocks. I haven't noticed it myself but biologists in Canada have mentioned it is possible after they landed fish, tagged them and then find some dead shortly after. After doing some reseach they found they bruised their brain while being landed on rocks and died.

Booking now: Full Day Spey casting & Steelhead school March 5th on the Queets river. $169PP with up to 3 people max. 2 spots open.
I focus on the National Park section of the Queets River due to it's great swing water but fish most of the other rivers around depending on fishing/river conditions.


Update: Upper sections of puget sound rivers will close Feb 15th and everything else will close Jan 31st.
As for trout there are some bull trout on the Skagit/Sauk and sea run cutts on our local rivers depending on where you fish. In the past people often over look the Dolly Varden
but with other species lacking we have found them to be a great target when you just need some tuggs. They hit the fly hard and finding one or 2 over 25"+ is not uncommon.

Check out our calendar - http://flyfishsteelhead.com/guiding.htm