Looks like my favorite O.P. river is off to a good start. It has fish, the hard part is just hitting the river levels right. The rivers are taking a little beating right now, February can be like that. A good back up is the Upper Quinault though. With as much water as we got last night and today it still had 6+ ft of vis when we left it today. I'm back home long enough to dry out and head back for more.

I’m getting ready to head out and hit the peninsula (Dennis is off to Puerto Rico). I was pretty disappointed that WDFW decided that they are going to allow a 1 fish kill of WILD Steelhead in most of the Peninsula rivers, especially on the Hoh. The Hoh has had a few years where they have to shut down due to low numbers. The numbers still aren’t stable enough to allow for any Wild fish to be killed I don’t know what WDFW was thinking. Just goes to show the thinking mentality. We call it Kill and close vs. keeping a river open and allowing catch and release.

Being that the Queets in the National park you can’t keep any there. This has helped the good returns we have been seeing in the past 5 years. This should be a good season. I’ve tied lots of flies and am ready to hit it. I have 2 weekend dates that are open due to a cancellation that I will give a discount on for last minute booking. Dates are 17th and 19th of Feb, let me know if interested.
Also most guys start thinking of other fish come April but April is just as good if not better than March. The Queets closes on April 15th but I’ll flip over and hit the Bogi or Sol Duc till May. By the time May hits most fish are spawning and I’m done. 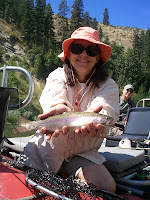