"Careful what you pray for"

Mike has been chaffing at the bit, gearing up for another early spring season out on the O.P.'s , Queets river. Not many anglers and fewer guides work these Park waters.

The word out, that the fishing has already heated up. We were just looking for that rain. Never say that about out there! There is real reason they call this area a rainforest.

Should you venture out, here are a few of our favorite winter steelhead fly patterns.

Keep them big and wiggly. Big native steelhead are not shy. Especially the tidewater Queets fish.

As far as the equipment goes, bobber fishing does work, but not like it does in the canyon rivers further north. The Queets is a gently flowing big time swing water, so if you have a passion to fish your sink-tips, this is a river to do it.

I like the versatility of the multi-tip system. Just as not river flows the same, neither do the pools that live there. Knowing when and where to change up your heads can spell the difference of a big fish or no fish.

I could write a whole article on leaders but suffice it to say, my rule is; a foot of leader length for every foot of visibility. Fortunately, the Queets is glacial so a short and stout leader is just fine. Twelve to fiften pound tippets are good. Forget the florocarbon stuff here. Go for the an abrasion resistant leader like Maxima or the like.

The Queets wading is relatively easy in most runs, but the casts can be moderate to long. Mike will have the spey rods along so if you haven't done this yet, you probably will. I am just saying!

Back on the home front:
I will be handling the flyfishing newbies in both out casting classes & the Lakes. around Arlington.
Trout are starting to move now. Micro leeches are the order of the day. Remember; "the Ledge, the edge, the hedge". The humingbird 120 is a wonderful horizontal fish finder. You should see it in action!

Guys can't talk about their waters without a serious discussion about their boats. For  the 40 stories and articles on fishing I have written over the years, here is one of the most popular yet controversial. Rafts VS hard-bottom boats

Fishing is already taking off in both lakes & rivers so it looks to be a fine spring. Spring: My second to my most favorite time of the year. Life is good.


Quick update - The reports for peninsula steelhead are looking great. I have a couple guys looking for partners on March 6th and 7th to split the trip with. I also have some great dates open in late march that I'll give $50 off on. Due to popular demand I am adding a O.P. School on March 30th. Also a lot of guys over look fishing in April. The weather is a bit nicer and there is still some nice fresh fish.
Let me know if interested. 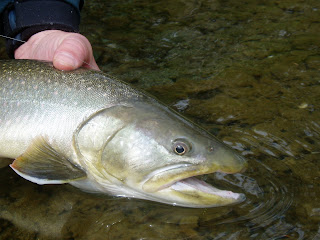 February 6 2013
And so it goes.
Well, I am back to writing weekly fishing reports again. I hope you find them informative if not entertaining.
The Puget Sound river season is coming to a close early, again. The bright news is, The Queets on the Olympic Peninsula is posed to have another stellar year. If you have a large steelhead in your horizon, you might want to hook up with Mike ASAP. His dates are booking fast. 425 330 9506
Me? I get to guard the home front conducting the Casting classes & Lakes Schools for the next few months. You can read all about it in the Flyfishing Made Easy program. Teaching 300-500 fly anglers a year. Guiding isn't All we do!
So the river reports:
The Skagit in the Rockport area is fishing the best. (5000-6000 cfs. @ Marblemount). Hatchery winter steelhead was short lived at best but the Dolly fishing has held up. Its hard to beat Cop Car for taking these fish, but anything big and wiggly will get a bite.
So many fly anglers have gone to swing fishing with tips but I maintain it is still the most misunderstood technique for taking winter fish. Here is an updated article I originally wrote some 10 years ago called Flylines are what catch fish.
Next reports will be relayed from Mike out on the coast.
Speaking of which:
Dickson Flyfishing will host a second seminar at Cabelas
Topic: Swing Fishing for winter Steelhead, Olympic Peninsula and beyond.
We have decided to make this one into a workshop with 10 different displays covering everything from fly-tying to spey rods & equipment. We will have plenty of experts there to answer your questions, plus lots of hands on do-dads.
Mike will be on hand to show his Queets River video, while I will host the show. Here's the Scoop.
Where: Cabelas @ Tulalip
When: February 23
Time: 5-7 PM
Come as you are. It's free!
Best of fishing,
Dennis & Mike Dickson
www.flyfishsteelhead.com
Posted by streamsideflyshop at 9:35 AM No comments: