New - O.P. Partner needed for steelhead trip : March 27th or 28th or April 2nd.
What a beautiful week on the peninsula. One day we literally floated past 2 walk-in guys that both had there shirts off. I'm not that hard up for a tan. Looks like a lot of rain is on it's way though. There seams to be a decent amount of fish in the rivers. Fishing was great to good last week. Dianne was the quickest to ever get a hook up. I threw some line out and handed her the rod and before I could show her how to cast she yelps with "I think there is something on". She ended up landing a nice little 6 lb. hen.
We had one slow day on one of the busier weekend days on a float I normally don't do. I had one of the guys out the day before so we wanted to hit something different. We had one good pull but it didn't stick. The first trip this year we didn't get fish out there :(
The biggest fish we hooked this week broke Tim off in a little tree snag. There was literally nothing around for a few hundred yards except for this little damn snag on our shore and the fish screamed off into his backing and on his 2nd run made a b-line straight to it. I was standing fairly close to it when the fish hung up on it, the slab made a few splashes and rolls, then broke him of before I could do anything about it. Man what a hot fish!... heart breaker.

Couple float warnings: On the upper Queets there is a tree all the way across the river. It's passable but a pain. Stay on the left braids, the right braids have low water and logs/sweapers.
On the float on the Hoh above Oxbow there is also trees across the  river.

Looking forward: I am booking Methow trout trips in late July/early August and Pink salmon trips will start on Aug 15th and go till October.

Posted by streamsideflyshop at 11:27 AM No comments:

Can you spell rain? 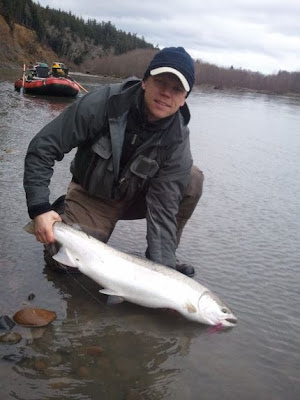 The Queets River is an absolute jewel to flyfish. This gentle stream flows through the lower section of Washington's Olympic National Park. Towering Sitka Spruce have lived here for generations as has herds of Roosevelt elk. For all it's splendors though, all this simply becomes the back drop for the late winter native steelhead that calls the Queets river, home. Big, brawly steelhead, hours away from tidewater.
Yup, if you were looking for that steelhead that can stop your heart while it stops your fly, Queets river steelhead are built for that.

The good news is: the Queets is off to a grand start this year with already fine numbers of returning steelhead headed for home. The fish run doesn't even peak until the end of this month, and some the best fishing continues until the river closure April 15.

The bad news is: The poopy weather lately hasn't allowed for much fishing the last few days. Bummer but when you fish out on the coast, you get to expect it. it's just the way it is.

Fortunately, the soils out here are "excessively drained", which it a fancy way of saying, the river can come up in a hurry, but also drops just as fast. Welcome to free-stone streams, it's what they do. Mike will be keeping his eyes peeled, because when the Queets drops, it always full of fish.

Last week I mentioned a few of my favorite flies for fishing these waters. That part isn't going to change much.

Here is an piece I wrote discussing the sink-tip leaders I use for chasing cold water steelhead. It's called, Leaders-the steelhead connection. I hope you enjoy it.

On the home front: casting classes will commence as well as our Lakes classes. Mark March 9 in your calendar as I will lead our next lakes class to one my favorite local haunts. You can call me directly for details. Cost is $59./angler, and I will arrange for all your needs in this 4 hour crash course. Sorry, I will only take the first six anglers.